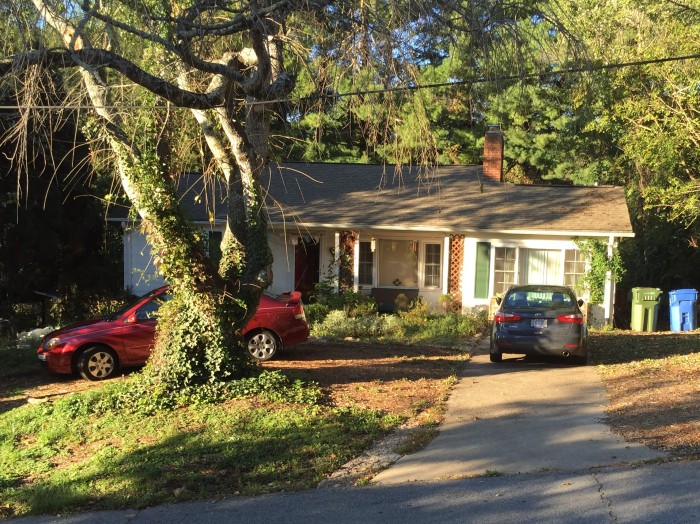 Marty Tackitt-Grist, also known as Martha Grist, has not worried one of her limited brain cells over the $500 per day fine for operating an illegal motel in violation of Asheville’s laws.  “What the heck!” she figures.  She’s been a common criminal for years and never been prosecuted yet — felony perjury, tax evasion, mail fraud, civil conspiracy, conspiracy to practice law without a license, larceny, illegal dumping, criminal violations of Asheville’s Building Code, numerous frivolous 911 call crimes, cruelty to animals, criminal assault, and now criminally operating an illegal motel in plain sight in a residential neighborhood zoned for families, not commercial use like motels.

So this is the weekend beginning Friday, October 7, 2016,  and yesterday about 5 p. m., travelers drove in, got out of their car (a gray-haired man with a pony tail and a woman) and carried their “motel” luggage around the side of Mad Martha’s house and settled into her illicit basement “motel” unit.  This morning I made photos of their car, a grey Kia, NC license tag no. AFK-1957 and a Chris Leith Kia ad on the tag cover and trunk lid.  Chris Leith Kia is located in Raleigh, NC.

I noticed this past Monday, October 3, 2016, that someone with the city cruised by a couple of times after the report of last weekend’s motel guests.  I can assure you that Shannon Morgan who is salaried for and paid by the taxpayers to investigate this crime and prosecute it has been provided with a full report about this and other illegal motels on Aurora Drive.

More to come, including photos of motel guests and a mattress that lay in Mad Martha’s yard for weeks until she illegally dumped it beside a dumpster at Star Lanes Bowling Center, a block down the street.